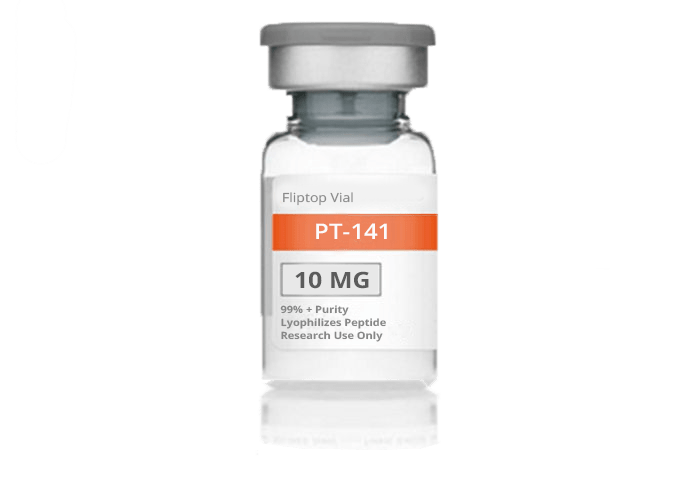 More and more people are looking at PT 141 (bremelanotide) as the go-to cure for sexual health problems. While it doesn’t cure all sexual ailments, it is a compound that does great things for people’s sexual dysfunction and arousal. People all around the world who experience problems with their sex lives need this medicine to help improve intimacy. One great thing about it is that the peptide produces few cardiovascular side effects, making it a game-changer for the elderly population who have a greater risk of strokes and heart attacks. Several clinical trials revealed the effectiveness of this substance, and it has been approved by the FDA for female treatment. Although the approval isn’t yet out for men, data is promising and a number of scientific papers cite the substance’s positive effects on male sexual health. Let’s discover more.

PT-141 is a peptide hormone treatment that is mainly innovative for improving sexual function in both men and women. It is a derivative for Melanotan II, more specifically a synthetic cyclic heptapeptide derivative of the alpha-MSH hormone. Its chemical makeup means that it works as a non-selective agonist for receptors MC1 to MC5, which are found primarily in the body’s nervous system.

You may have heard it more commonly referred to as Vyleesi, Bremelanotide, or the “sex peptide” as it produces a positive sexual response. Other than the enhancement of sexual libido, consumers can also benefit from enhanced energy levels and greater arousal.

As for the question “Is pt 141 legal?” – after many years of research and clinical trials, the peptide was finally approved by the FDA in 2016, as a treatment for sexual dysfunction in premenopausal females.

Initially, peptide pt-141 made its way into research as a possible tanning agent for UV-free or “sunless” tanning. By applying this agent, it was thought that the application could produce the effect of a tan on the body, commonly referred to as a fake tan. Melanotan II tests revealed some darkening pigmentation but also led to a heightened state of sexual arousal and spontaneous erections in many male volunteers. There was a dawning realization, that pt-141 peptide could contribute better as a treatment for sexual disorders, particularly erectile dysfunction in men and a lack of sexual arousal in women. This became especially apparent after a leading scientist self-experimented on themselves, injecting the compound into their body. As a result, they had an erection for eight hours. However, it wasn’t until many years later that the drug got approval from the FDA as initially there were discrepancies regarding elevated blood pressure and trials had to be postponed.

Both Hypoactive Sexual Desire Disorder (HSSD) and Inhibited Sexual Desire (IDS) are considered sexual dysfunctions that lead to both an absence of sexual fantasy or sexual desire. In particular, Female Sexual Arousal Disorder (FSAD) renders women unable to maintain arousal or even attain sexual arousal during periods of sexual activity.

Pt-141 acts as a synthetic manmade aphrodisiac and is unlike many other related PDE5 inhibitor medicines such as Cialis and Viagra. The interesting thing about Pt 141 is that it doesn’t act upon the vascular system, rather it works directly on the hypothalamus in the brain to increase feelings of desire. Common medicines such as Viagra or Levitra aren’t aphrodisiacs and have no effect on a person’s libido, yet when used in combination with Pt-141 they are known to produce a synergistic effect.

Who Is This Peptide For?

If you look at peptides reviews online, you’ll likely notice that most people using this substance are those who experience some degree of failing sexual health. This peptide is particularly for those who have troubles with sexual dysfunction. Unlike a lot of other common sex substances, this substance is for both men and women.

How Does It Work?

Pt-141 for men and women works on the nervous system, increasing satisfaction, desire, and sexual arousal. Unlike other treatments that work on the vascular system and only give one the ability to maintain an erection, this substance creates motivation and desire along with an erection. It works just as well in females as males too, helping to boost libido.

The result is that consumers can enjoy the passion and intimacy of their relationships. In some essence they are the best peptides for sexual health because they work on the nervous system and do not affect cardiovascular health – this makes them safe for a diverse population, including those who are prone to heart conditions.

The peptide stimulates the production of dopamine hormones which increase sexual motivation. Dopamine is a common neurotransmitter that is responsible for performance – when you don’t produce enough of it, you can feel depressed and have a low libido in general. While pt 141 works to boost sexual health, it can also be great for increasing natural energy levels without resorting to harmful means such as drinks or pills. Moreover, the effects of pt 141 make it a great option as a fake tan, helping people get darker skin much faster than with conventional tanning methods.

Even though there are plenty of positive peptides reviews online, it is important to consider the scientific evidence when taking substances for yourself. Studies on bremelanotide pt-141 in journals such as Nature reveal conclusive evidence of pt 141 nasal spray increasing erectile response. This study conducted in healthy male participants showed a statistically significant increase in erectile response when compared to a placebo, with an erection occurring after 30 minutes. Similarly, a 2003 study by Molinoff et al. found that an administration of pt 141 to patients experiencing erectile dysfunction created a rapid increase in erectile activity, holding “promise as a new treatment for sexual dysfunction.” Results such as these have been echoed in double-blind trials of the substance on healthy humans.

Although key studies such as those by Clayton et al indicate the peptide’s use for combating sexual health problems, there are all sorts of other benefits to pt-141 intake.

There are even benefits unrelated to sexual health:

●     Anti-cancer properties – the MC-1R receptor works as a stimulus in DNA pathway repair. For this reason, scientists see potential in its future as a cancer treatment.

●     Tanned skin – initially the substance was investigated as a tanning agent. One can apply pt-141 superficially to heighten the appearance of tanning.

●     Promotes skin tanning – on top of a superficial application, the peptide can create a darkening of skin pigmentation when injected into the body.

Many effects of bremelanotide for men have been well documented:

●     Treatment of erectile dysfunction – The substance creates erections for men, helping to cure premature ejaculation, as well as impotence.

●     General health benefits – this substance is much less likely to lead to heart attacks or strokes compared to other medications such as Viagra.

Looking at numerous pt 141 women’s reviews you’ll see that the benefits aren’t only for men, they are for women too. The research found in scientific literature, including a multidisciplinary review by the FDA, outlines some benefits to females:

●     Treatment of generalized hypoactive sexual desire disorder – this is by far the largest benefit to women. More blood flows to the sexual organs and consumers note feelings of greater libido, as well as more pleasurable sexual activity.

●     Vasocongestion – sexual arousal, menstruation and several different factors can create vasocongestion in humans. Pt 141 can be used as a treatment.

●     Pelvic floor strength – one side effect of peptide 141 is that it creates a strengthening of the pelvic floor, working wonders for general female health.

There are numerous ways to take the peptide compound, such as sprays or direct injections. Usually, doctors recommend taking a dose 45 minutes before sexual intercourse. The FDA recommends that consumers should not exceed one dose per 24 hours or 8 doses a month. If no improvement in sexual libido or arousal is achieved after an 8 week period of use, you should consult a doctor.

● Bremelanotide is most effective when applying as a 2mg spray up each nostril.

● According to a 2016 study, the appropriate dosage for women is between 1.25mg and 1.75mg when used as an injection.

● Dosage can be adjusted if necessary, increasing dosage to 4mg, with two sprays per nostril.

● It’s important to consult a doctor or health practitioner to advise you on your recommended dosage. Dosage can vary depending on a person’s individual medical condition and sexual needs.

Every individual is different, but in general, the effects are felt within 30 minutes to two hours. Although administering the peptide can be an uncomfortable process, most men describe having long-lasting erections of up to 6 hours. After appropriate pt-141 dosing, both women and men can feel the effects for even up to 24 hours.

Although the most noticeable effects of pt 141 peptide are on the sexual organs, there are a few common side effects. We recommend discussing all possible side effects with your doctor, as well as any underlying health conditions that could affect the dosage. When people dose too high, they most often experience headaches, although these are usually much less intense than with those taking other medications such as Viagra or Cialis.

The most common side effects include:

●     An increase in sexual arousal

●     Congestion in the upper nasal passage

●     An increase in male blood pressure

●     Irritation or itchiness around the injection site

The FDA has approved pt 141 for men and women, helping to treat hypoactive sexual desire disorder as well as erectile dysfunction. Although there is current approval for females, it should be noted that the FDA has yet to approve the treatment for men. Still, a number of studies indicate its effectiveness in curing male sexual ailments.

The future looks bright for this substance, plus you only need to look at the number of positive pt-141 reviews online that speak of its effectiveness. After doing your own research and reading all the pt 141 reviews 2020, always be sure to consult your doctor or healthcare provider regarding the correct dosage for pt 141, especially if you:

●     Have issues with your kidneys and/or liver

●     Have a family history of cardiovascular disease